Jack Dorsey is no fan of Mark Zuckerberg. He once told Rolling Stone that at dinner at Chez Zuck, the Facebook CEO served him a goat he had killed, and the meat was cold. More recently, he made fun of Zuckerberg’s metaverse ambitions. Nonetheless, however unintentionally, today the CEO of Square finds himself making a similar move to the social media mogul who changed Facebook’s name to Meta just five weeks ago.

Square is now Block. Got it? Block.

Just as Meta retained the Facebook name for its flagship product, Block will continue using Square for its “seller” business, which includes payment systems and banking products for merchants. The new name, which takes effect today—the 12th anniversary of Square’s launch—reflects the broader scope of the company’s business, which now includes the personal payment service Cash App, the music service Tidal, and a nascent crypto-based open developer platform it calls TBD54566975.

In its statement announcing the switch, Block marvels about the connotations contained in its new moniker: “Building blocks, neighborhood blocks and their local businesses, communities coming together at block parties full of music, a blockchain, a section of code, and obstacles to overcome.” Buried in the middle of that list is the one that most likely has driven the change: blockchain. Square, and particularly Dorsey, has embraced the crypto revolution, almost to the point of having a sticker on its products saying “Bitcoin Inside.” (By the way, the company’s Square Crypto division will now be called Spiral, though the company did not provide a similar word-association list for that.)

Here’s another linguistic feature: Just as with Alphabet, which made a similar move when it changed its name from Google and called its various businesses “bets,” Block will refer to its divisions as “building blocks.”

Block says that everything else at the company will be the same, with employees engaged in everything they did previously, except with new email addresses. The new corporate website will have the address of block.xyz; the seemingly preferable block.com appears to belong to a stealth cryptocurrency firm. Currently, the company’s NYSE ticker symbol SQ will remain unchanged.

New Regulation Could Cause a Split in the Crypto Community

Big Crypto has arrived. On August 10, following days of wrangling and furious tweeting, cryptocurrency enthusiasts, advocates, and entrepreneurs watched in horror as the US Senate approved a $1 trillion infrastructure bill, complete with an article that many fear might jeopardize the whole American crypto sector beyond repair. The controversial rule would require that “brokers” of transactions in digital assets—i.e., cryptocurrencies—report their customers to the Internal Revenue Service so they can be taxed.

The crypto crowd griped that the bill’s definition of “broker” was so broad it would potentially encompass miners, validators, and developers of decentralized applications—all of which, while playing pivotal roles in the functioning of a blockchain ecosystem, have no way of identifying their anonymous users.

Initially, it had looked like the bill’s language might be tweaked to exempt those categories, as a trio of senators put forth an amendment clarifying the “broker” term. Then a White House-backed amendment appeared, pushing for a less lenient clarification, exempting proof-of-work miners—which use an energy-intensive process to secure blockchains such as Bitcoin or Ethereum—but not many other categories, such as proof-of-stake validators, which carry out the same function without the energy burning. Just as a compromise position was being worked out, the Senate decided to pass the bill unamended. Any change will have to happen at a later stage—and it likely will, given the patent unenforceability of the bill as is.

On the face of it, it’s a drubbing for American crypto. But the narrative that has been doing the rounds is quite different: The infrastructure bill is a watershed moment in the history of cryptocurrency. The technology—at its core a crypto-anarchist, anti-bank, borderline anti-government manifesto disguised as code—has finally acquired that great marker of prestige: a lobby. The fact that some senators were ready to fight in crypto’s corner appears to show that the cryptocurrency industry is more than a gaggle of Twitter accounts and some blue-sky venture capitalists. Whatever the reason, it has influence, and—after the infrastructure bill saga—it will be ready to wield it even more deftly.

“We’re seeing the formalization, the maturing, of the crypto lobby, and this was the first coordinated effort that brought that to bear,” says Alex Brammer, vice president of business development at Luxor Tech, a bitcoin mining company. “Organizations like the Blockchain Association, the Texas Blockchain Council, or the Chamber of Digital Commerce are certainly going to continue their work.”

Cryptocurrency is usually, and lazily, described as a Wild West, but as a matter of fact the established businesses operating in the sector—from big mining enterprises to Wall Street–listed giants such as Coinbase—tend to crave regulation to define the boundaries of what is acceptable and what might get them into trouble. “Sophisticated players in this space welcome intelligent regulation. It provides clarity and predictability for large operations,” Brammer says. “It provides a set of rules of the road that allow large, publicly traded companies to make sure that they’re doing everything they can to be as viable and as profitable as possible going forward.”

But where does that leave the smaller, less established, less corporate players? Bitcoin—an asset owned and lionized by billionaires such as Mark Cuban and Elon Musk—has been growing since 2009 into an industry that carries heft and brand recognition. (Even Ted Cruz is waxing lyrical about it).

The much-contested amendment approved by the White House would have saved bitcoin while throwing much of crypto under the bus. Granted, when that plan emerged, the crypto lobby—or, at least, crypto-Twitter—rose as one against it. Jerry Brito, executive director of cryptocurrency trade group Coin Center thundered against the Senate’s attempt to pick “winners and losers,” while venture capitalist and crypto-ideologue Balaji Srinivasan said that the amendment would eventually open the door to a full-blown bitcoin ban. But it is worth wondering whether, in the long run, a rift might open between a Big Crypto clamoring for clear regulation to achieve peace of mind and the smaller actors of the cryptocurrency community, who might be less well equipped to meet the requirements that regulation would impose. 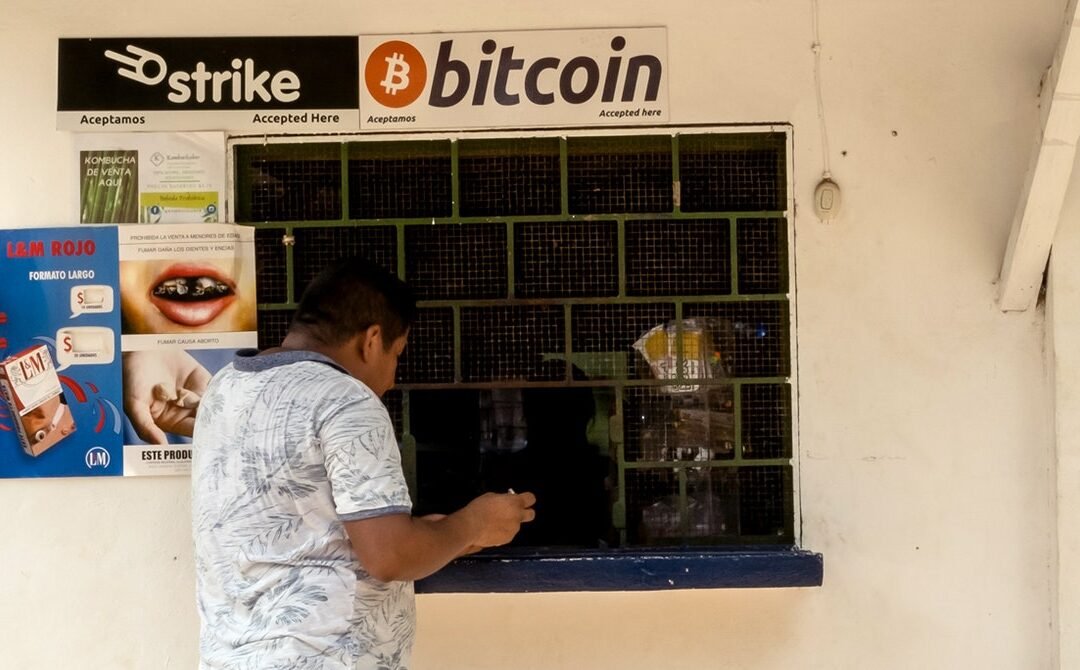 Pierce says he is impressed by the government’s drive. “This government is incredibly entrepreneurial,” he says. “They are like just getting things done at lightning speed.” He says that he is working to organize a “big conference” in the country.

Lauren Bissell, a former Cambridge Analytica employee who later converted to blockchain and Bitcoin entrepreneurship, and was part of Pierce’s delegation, says she was “beyond impressed” by the government figures she met during the trip.

Yet Bissel admits that the road map to Bitcoin adoption looks very ambitious. “There’s going to be a lot of hours of no sleep. There’s a lot of work to do,” she says. “But I think that the launch will go successfully.”

With the countdown to Bitcoin Day down to just 69 days, the nuts and bolts needed to make the cryptocurrency work as legal tender are still a mirage. Athena, a company that had been initially tipped to install 1,000 ATM machines in the country (and challenged by Bukele on Twitter to deploy 1,500) will start with just 14. Going from volcano emoji to reality will also take time. “What you have in El Salvador is, seemingly, an abundance of geothermal energy and, at least for the time being, a friendly jurisdiction,” says Alex Brammer, vice president of business development at Luxor, a cryptocurrency mining company. “Providing the infrastructure there is going to take years.” Even the Bitcoin law looks like unfinished business: Its redrafting of an entirely new monetary system is hastily sketched in two pages and 16 articles, which is why a more detailed regulation is expected to be issued soon.

What is really Bukele’s game? One oft-repeated case for his move is that Bitcoin would be “banking the unbanked.” That fusty mantra is usually balderdash, but it might have some merit here, as 70 percent of El Salvador’s population does not have a bank account or access to easy payment solutions. By this line of thinking, a government-backed Bitcoin wallet, as a smartphone app, could arguably reach more people than existing banking service providers do, and might offer a convenient, low-commission medium for the Salvadoran diaspora to send back remittances. A small-scale Bitcoin project in El Zonte—a seaside town in northern El Salvador—was moderately successful in making the local economy function more efficiently and is credited for inspiring Bukele. In this reading, Bukele is the edgy maverick wielding liberating technology to lift his people from the state of deprivation to which financial institutions have consigned it.

There are problems, however, with that narrative. Some have pointed out that only 45 percent of the country’s population has internet access—and that an internet connection will be required to use the app. Ricardo Barrientos, chief economist at ICEFI, a Guatemala-based research institute focused on fiscal studies, predicts that Bitcoin will be treated as a “weak currency,” with employers keeping their savings in dollars and using the more volatile Bitcoin to pay salaries to their workers. “This class divide could trigger social tensions—that’s a recipe for disaster,” Barrientos says. The report Barrientos cowrote for ICEFI on this subject subtly suggests that by making Bitcoin legal tender without installing any anti-money-laundering checks, the government plans to encourage a “certain kind of acquisitions or investments” by creating a parallel market where “opaque operations” can take place.

Barrientos expects Bukele to backtrack before September 7 under pressure from international financial institutions and of some of his own advisers. Were that not to happen, Barrientos hopes that Bitcoin won’t catch on among the population. “The best-case scenario for it is that no one uses it and everyone keeps using dollars, apart from some narcos,” Barrientos says. “Hopefully there will be a natural debitcoinization.”