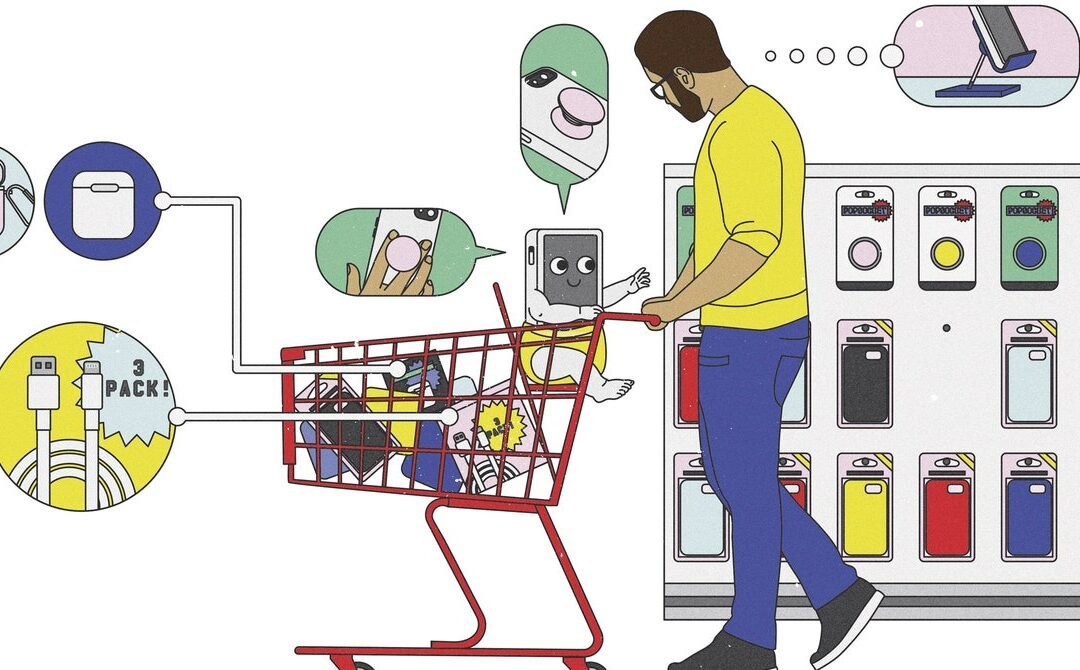 Years ago, I asked a friend what kind of case she planned to buy for her shiny new flip phone. She paused, a little offended. “I don’t like to buy stuff for my stuff,” she said. Those words drilled directly into my hippocampus, never to depart. She’s right! I thought. Don’t buy stuff stuff! So simple! I have tried to keep to that principle ever since, and it has gone about as well as you would expect. Sure, I might spend $1,000 on a tech-giant-controlled smartphone, but I only do it every three years (nods sagely) instead of every two. This is how we win.

The problem is that certain kinds of stuff simply attract more stuff. The home is an obvious one: It craves sofas, sweaters, buffet cabinets, chandeliers. Computers are another; they grow USB tendrils. Smartphones beget earbuds, cloud backups, and music service subscriptions. I am jealous of the people who make it work with an Eames chair, a fancy ottoman, some nice art books, and multigenerational inherited wealth. Their iPads are so empty, just a few apps, whereas I have 60 terabytes of storage spread across a variety of blinking devices because I download large data sets for fun.

I often trick myself into thinking that the road to less stuff might be paved with more stuff. Recently, under the influence of some long-suppressed percussive desire, I bought a drum machine. It’s actually more of a portable production studio—a hardware-based update of the music-sequencing software from old Amiga computers. It has buttons, a jog wheel, and a screen that shows mostly numbers. It’s called the Polyend Tracker, but I think of it as the Sonic Spreadsheet. Everything you can do with it can also be done on, you know, a laptop. Crucially, though, it doesn’t connect to the internet.

I bought the Sonic Spreadsheet with the fantasy of going offline, escaping the centralized world in which I live, making sick beats in the backyard or at the kitchen table. I wanted to stare at a little screen instead of a big screen, which is how I do back-to-the-land. Instead I ended up hunched in front of my regular monitor, watching YouTube videos of various nerds demonstrating how they make beats. Most of their beats were not that sick. Their lighting was good, though. Maybe the people making the sickest beats are not making YouTube videos.

I am not a musician. I am a systems administrator for my digital audio workstation.

After a few weeks of use, the Tracker began to call out: Feed me accoutrements. Boxes of stuff started to arrive—bendy legs to prop it, rubber feet to stabilize it, a padded case to protect it, a battery pack to power it. While I had a microphone and many headphones, I decided that I wanted a special microphone and special headphones just for this thing. Then I downloaded 100 gigs of audio samples from the 1990s, which meant that I needed to upgrade the Sonic Spreadsheet’s microSD card. (And of course the samples were inconsistently named, so I wrote code to organize them.) Each thing, each unit of stuff, came with its own, pet stuff—a stand, a foam cover, cords, a manual, a little drawstring case. The supply chain is fractal: Zoom in on your stuff and there’s more stuff, ad infinitum.

The upshot of all this is that I have absolutely no musical talent. I spent hours cutting and pasting, turning tiny expressions into whole songs, spinning that jog wheel like a pro, and when I came back to those tracks the next night, I kept discovering that I did not have a single creative idea. My drum tracks sounded like a nervous rabbit kicking a bongo. If you need portentous, pompous digital clown music that might as well be Christmas carols played in dog barks, I am your guy. I am not a musician. I am a systems administrator for my digital audio workstation. There will be no SoundCloud for me.