Can Democracy Include a World Beyond Humans? 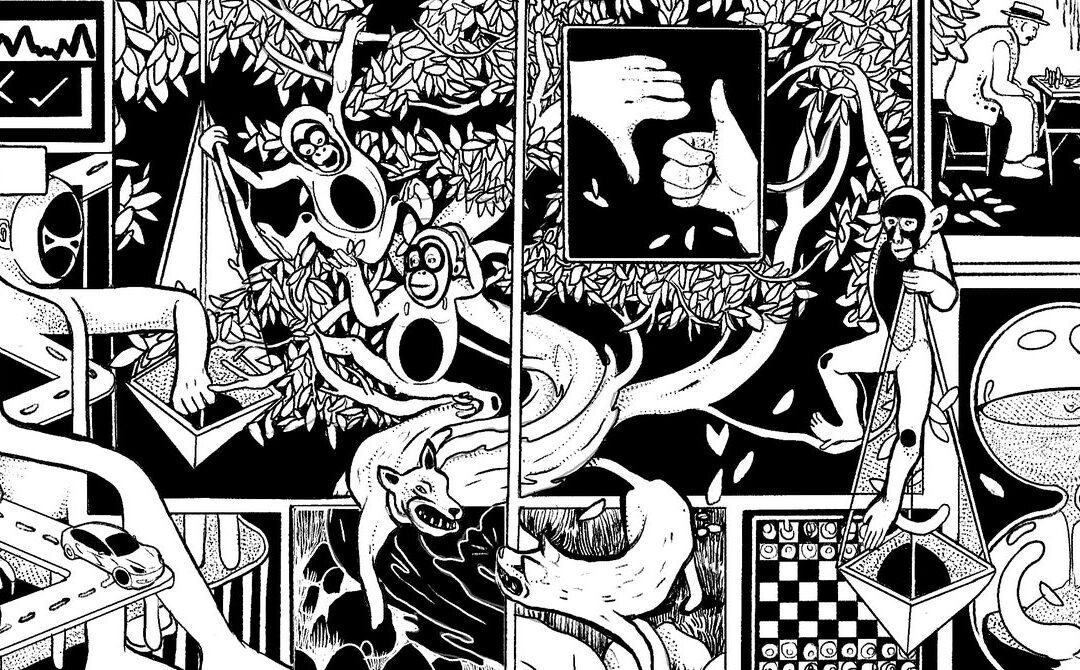 There was once an orangutan named Ken Allen at the San Diego Zoo who was notorious for carrying out complex escape plans. He found every nut and bolt in his cage and unscrewed them; in his open enclosure he threw rocks and feces at visitors. On one occasion, he constructed a ladder out of some fallen branches, carefully testing his weight on the rungs. After that, the zoo raised his enclosure walls and smoothed them to remove handholds.

Hoping to distract Ken, the zoo introduced some female orangutans. But Ken enlisted them as accomplices: While he distracted the zookeepers, his fellow inmate Vicki pried open a window. One time, Ken was caught waist-deep in water in the enclosure’s moat, attempting to inch up the sides, despite the fact that orangutans are believed to be intensely hydrophobic. As for the electrified wires on top of the enclosure walls, Ken tested them repeatedly, and one day, during a maintenance break, he tried to hop out.

Animal escape attempts often make novelty news headlines, but these are not mindless acts of sabotage or curiosity; rather, they are forms of active and knowing resistance to the conditions forced upon them by humans. Animal acts of resistance in captivity mirror those of humans: They ignore commands, slow down, refuse to work, break equipment, damage enclosures, fight, and abscond. Their actions are a struggle against exploitation—as such, they constitute political activity.

Politics, at heart, is the science and art of making decisions. We commonly think of politics as the stuff done by politicians and activists within the framework of national and local government—but really it is the mundane, everyday business of communal organization. Any time two or more people make an agreement or come to a decision, politics is at work. For humans, politics plays out in all kinds of ways: in parliaments, at the ballot box, in our daily decisions about how we want to live. Every choice we make that affects others is itself political. This obviously includes voting, but it also includes the things we make and design; our relationships with our partners and neighbors; what we consume, act upon, share, and refuse. Even if we say that we want nothing to do with politics, we don’t really have that option—politics affects almost every aspect of our lives, whether we want it to or not. By definition, it is the process by which almost anything at all gets done. In this sense, politics, when organized, is also a kind of technology: the framework of communication and processing that governs everyday interaction and possibility.

Animals act politically, and they turn out to be rather good at it.

This understanding of politics also means that our decisionmaking processes must extend beyond our own human lives: to nonhuman animals, to the planet, and in the very near future to autonomous AI. I call this a “more-than-human” politics, drawing from ecologist and philosopher David Abram’s concept of a more-than-human world, a way of thinking that fully acknowledges and engages with all living beings and ecological systems. A more-than-human political system can take many forms. Among humans, most political interactions are legislative and judicial, but we have much to learn from the myriad ways animals act politically among themselves.

Animals do politics practically; this is true for individual animals, as in the case of Ken Allen, but it is especially important for animal social groups. Social cohesion is critical to collective survival, and so all social animals practice some kind of consensus decisionmaking, particularly around migration and selecting feeding sites. Just as in human society, this can lead to conflicts of interests between group members. (Most of us are familiar with the horror of getting a group of people to agree on a restaurant.) The answer to this problem in the animal world is rarely, if ever, despotism; far more frequently, it involves democratic process.

A few remarkable examples: Red deer, who live in large herds and frequently stop to rest and ruminate, will start to move off from a rest area once 60 percent of adults stand up; they literally vote with their feet. The same goes for buffalo, although the signs are more subtle: The female members of the herd indicate their preferred direction of travel by standing up, staring in one direction, and lying down again. Birds, too, display complex decisionmaking behavior. By attaching small GPS loggers to pigeons, scientists have learned that decisions about when and where to fly are shared by all members of a flock.

Perhaps the greatest exponent of animal equality is the honeybee. Honeybees have their own distinct history, first as thoughtful pastoralists and pacifists—all bees are descended from one species of wasp that decided to go vegetarian some 100 million years ago—and secondly as highly organized, communicative, and consensus-building communities. Their storied commitment to social life is enshrined in the beekeeper’s proverb, which might double as a political slogan: “Una apis, nulla apis,” meaning “one bee is no bee.”

Honeybees perform one of the greatest spectacles of democracy-in-practice, known as the “waggle dance.” The waggle dance was first described scientifically in 1944, by Austrian ethologist Karl von Frisch, as a means by which forager bees share the locations of nearby pollen sources. A few years later, one of Frisch’s graduate students, Martin Lindauer, noticed a swarm of bees hanging from a tree. Their behavior indicated that they were searching for a new home. But he also noticed that some of these bees were performing waggle dances, and that unlike pollen-dusted foragers, these bees were covered in soot and brick dust, earth and flour. These weren’t foragers, Lindauer realized; they were scouts.