‘My Body Is Used to Design Military Tech’ 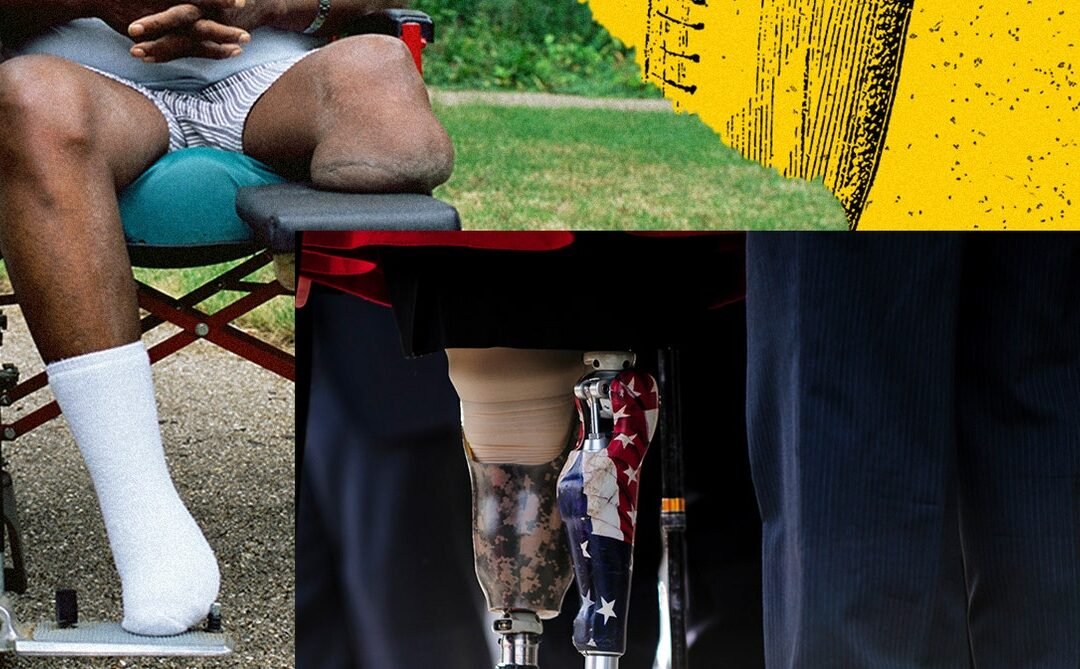 My left arm extends all the way up to and just barely past my elbow, tapering into a small, fleshy stump. For prosthetists, I’ve always been a weird fit—that funny little kid in the office with my arm held out like a bird with a broken wing, waiting for the plaster mold to dry. Since I do not have a forearm, a prosthesis socket must fit over my elbow to stay on, but the socket necessarily limits the range of motion and makes it harder to prevent falling off during a full day of bending and extending. My most recent prosthetist had devised their own patented method of molding a socket that better accommodates bodies like mine.

What I didn’t realize was how else they have applied this knowledge, before I even became their patient. With funding from the Defense Advanced Research Projects Agency (Darpa) to develop wearable technologies for combat soldiers, my prosthetist had designed a suit made up of black straps, metal joints, and sinewy tubing, reminiscent of an outfit for a dystopian video game character. This exoskeleton is intended to “reduce injuries and fatigue and improve soldier’s ability to efficiently perform their missions,” and could potentially make real-life soldiers more lethal. The technology that allows soldiers to jump and crouch and shoot while wearing this contraption, they say, is the same as what went into making my socket. It is the result of years of experience working with people with limb differences that make it very difficult to fit a conventional prosthesis, people like me. My body—or bodies like mine—is used to help design military technology.

Imagine if your dentist applied their years of experience working on mouths like yours to develop, say, teeth weaponry for the military. Inside American prosthetist offices, this is actually a fairly common relationship. The revolving door and entangled history between the prosthetics and orthotics industry and the military has forced patients like me into a cycle of design that creates high tech arms for American veterans on one side and death and mutilation on the other. The intention is that future soldiers wearing this technology would be better at destroying enemies— creating more disabled people who will likely never receive a prosthesis. A crucial part of this cycle is the industry’s fixation on developing new, expensive, electronic prosthetic devices for veterans, who receive them from the government at no cost. Yet the vast majority of people who experience limb loss in the United States not only never receive these devices, they aren’t veterans at all.

Prosthetic devices were once largely homemade contraptions devised by their wearer to help with domestic tasks. George Webb Derenzy, captain of the 82nd Regiment in the British Army, who lost his arm to gangrene during the Napoleonic Wars, is known for designing a number of domestic mechanical gadgets that he describes in his 1822 book, Enchiridion. (Come for the one-handed boot hooks, stay for the steel egg-holder.) These kinds of devices didn’t have a large potential market and were geared toward private use. Derenzy believed they could help disabled people rejoin society without having to “burden” others with requests for help with specific tasks.

It wasn’t until the American Civil War—during which 60,000 soldiers underwent limb amputations—that the prosthetic arm and leg became lucrative business opportunities and valued commodities. The US government propped up this new industry by passing a law that issued a prosthetic limb to every veteran amputee in need. By the late 19th century, there were a number of competing prosthetic limb manufacturers: The Salem Leg Company, A. A. Marks, and J.E. Hanger, which today, under the name Hanger Clinic, is one of the largest prosthetic limb providers in the US.

The frontier of prosthetics shouldn’t be defined by the dreams laid out by the military.

The commodification of the prosthetic limb came up against some initial reluctance to hide stumps inside wooden sockets. For many Confederate veterans, healed-over stumps were a mark of pride and resilience—a true survivor bore a stump. In time, sentiments about both limb loss and artificial limbs shifted dramatically. According to David Serlin, professor of communication at UC San Diego, the US military spent the first half of the 20th century developing various analytical methods to identify the body types of ideal military recruits. The result, in popular media and the public consciousness, was an indelible association between the military and the idealized male body: muscular, symmetrical, and lean. When these bodies returned from the World Wars with missing limbs, the military sought to convince the public that not only were these men especially masculine for putting their bodies on the line, but also that prosthetic devices would help reaffirm their masculinity, virility, and even heterosexuality.

Prosthetic devices have a deep history with patriotism and nationalistic projects. The carefully staged images of veterans using prosthetic devices in Carry On, a 1918 magazine produced by the US surgeon general, told the story of how the synthesis of man and technology could completely rehabilitate amputees. According to Beth Linker, a professor of history and sociology of science at the University of Pennsylvania, the staff at Carry On “hoped to persuade the public that rehabilitation had the power to make the wounds of war disappear.” In their marketing campaigns, prosthetic limb manufacturers similarly sought to associate the prosthesis user with a triumphant and resilient nation—painting a new image of the veteran completely remade through technology and able to return to the workforce. Today, the true survivor bears a polypropylene socket with an airbrushed bald eagle flanked by fireworks and the American flag.