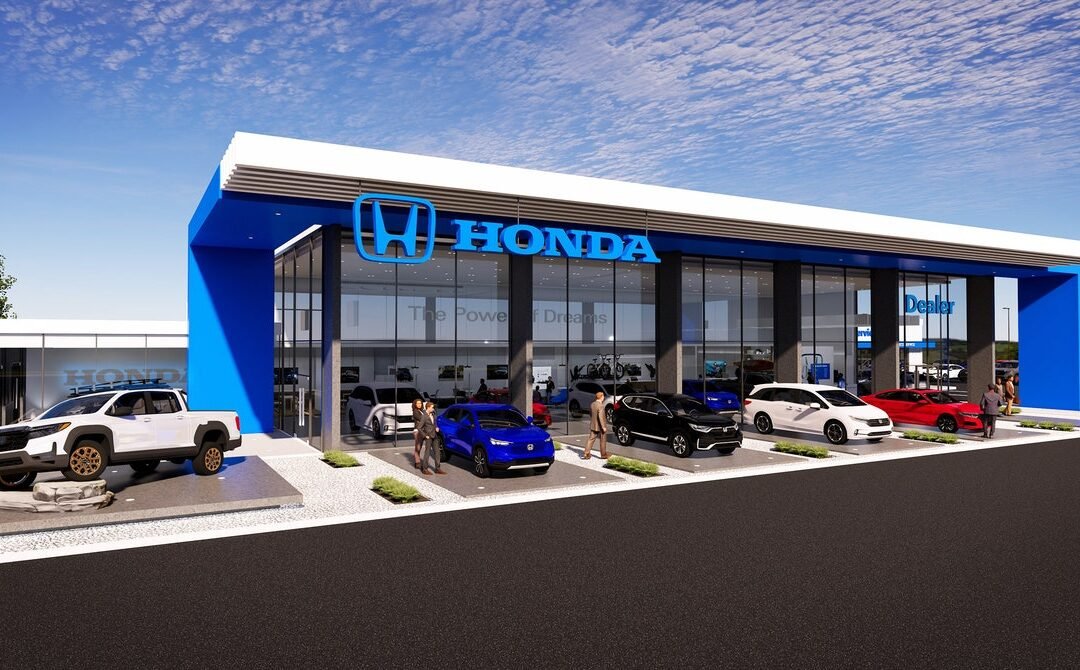 Few people love car dealerships. They’re stressful and sprawling, and it’s hard to shake the feeling that someone is getting a raw deal. But as the auto industry increasingly goes electric and moves online, companies like Honda are rethinking every aspect of the purchase process—including the spaces in which it happens.

Honda announced today that it’s rolling out a new dealership design, one that takes up less square footage and is modular and flexible; what was once showroom space, for example, can be transformed into offices for employees. It’ll also have electric vehicle chargers, as the company aims to sell half a million EVs in the US by 2030. “Our dealers are looking at ways to modernize and digitalize their business,” Mamadou Diallo, the vice president of auto sales at American Honda, told reporters last week. Recent experiences, he says, have taught the automaker that selling cars “will not require as much space.” And they’re not the only ones looking to shed square footage.

Like so many recent transformations, the shift is in part a reflection of the pandemic. Automakers have struggled through a shortage of semiconductor chips, a serious issue for vehicles that need hundreds and sometimes a thousand or more of them to work. The supply chain bottleneck means new car dealers have fewer vehicles on hand to show off to customers. Meanwhile, inspired by a new breed of electrified direct sales companies, like Tesla and Rivian, big automakers started experimenting with letting customers reserve and even buy their cars online. Ford made its first sales for its electrified sports car, the Mustang Mach-E, on the internet and took online reservations for its electric pickup truck. Volvo said last year that its electric vehicles—which the automaker says will account for 100 percent of sales by 2030—will be sold exclusively online.

“The dealership doesn’t need to be some Taj Mahal on the highway somewhere.”

That could make buying cars more convenient, but it makes selling them easier, too. Building cars to fulfill customers’ online orders takes some guesswork out of vehicle production, meaning fewer unexpectedly unpopular models end up languishing—and eventually selling at a discount—on showroom floors. “We have learned that, yes, operating with fewer vehicles on lots is not only possible, but it’s better for customers, dealers, and Ford,” Jim Farley, Ford’s CEO, told investors last summer. “But we’re also driving a significant increase in the number of customers configuring and ordering their vehicles online, so we have better visibility to real demand.”

This pandemic-era adjustment has not always worked out in car buyers’ favor. Dealers report that the combination of a tight car market and limited inventory means they can offer fewer discounts to customers hoping to drive their new purchases off the lot. Buyers pay more, and dealers make higher margins per sale. But industry experts are divided over whether those conditions will last beyond the public health emergency and related supply chain struggles.

Still, the era of the rows and rows of makes and models and colors may be over for good. “The dealership doesn’t need to be some Taj Mahal on the highway somewhere,” says Mike Anderson, the president of the Rikess Group, an automotive consultancy. Dealerships that Anderson advises have started to bring vehicles to potential customers for test drives, and then back to their homes or offices when they close the deal. Automakers like Tesla, Ford, Mercedes-Benz, and BMW are also experimenting with mobile servicing, or having technicians travel to customers’ vehicles. In some places, “many of the guests won’t see the dealership at all,” Anderson says.

It could take years or even decades for dealerships to change physically because it takes time and money to retrofit a building. Diallo, the Honda executive, says the automakers’ new dealership design “is not a program we are forcing dealers to adopt,” but a direction Honda wants its dealers to follow as they renovate and make updates. Volkswagen of America network operation vice president Brian Kelly says the automaker is considering similar adaptations. “We recognize that increased EV adoption, the growing preference of consumers to purchase vehicles through digital retailing solutions, and the proliferation of mobile servicing and vehicle delivery—amongst a host of industrywide changes—will have a forward impact on common size and layout of traditional dealership facilities,” he said in a statement.